History of the building

In 1705, Humber Olivet, a paving contractor, built a large and beautiful house in front of the Chapelle-Royale. He lived there with his wife, his six children, three servants and many animals. After the death of Humbert Olivet, Noël Olivet took over his father's paving activities and the house. It remained a family home until his death.

The heirs of Noël Olivet sold the house to Josse Bodenghien and his wife Catherine Ghignet in 1782. A few years later, Josse and Catherine gave the house to their son to make an inn. Petit Waterloo, now the center of Waterloo, was a relay point between Genappe and Brussels. Therefore, the Bodenghien Inn welcomed for several decades many travelers who stopped to rest and refresh their horses that carried coal.

While fleeing his country in the middle of the revolution, Louis XVIII, future king of France, stopped at the Bondenghien inn for refreshments. Despite his richly adorned carriage, he stopped in Waterloo discreetly before joining his brother Louis XVI, King of France, whose escape attempt failed at Varennes.

1815
The last headquarters of the Duke of Wellington

This residence has housed various head regiments before the battle of Waterloo such as those of the Prince of Cobourg, Prince Frederick of Orange and finally the Republican General Lefebvre, winner of the battle of Mont-Saint-Jean in 1794. During the battle of Waterloo, the Bodenghien Inn, which was at the time the most important building in the village, was reserved for the Duke of Wellington, commander of the allied armies. It was here that the Duke wrote his victory report, then sent it to the British government. It is dated Waterloo, June 19, 1815.

The first tourists arrived quickly after the battle. The first ones were the soldiers, often with their families, who came to see again the places where they had fought. Some celebrities such as the English writer, Walter Scott also visited the inn. Then came the tourists who wanted to visit the plain where the Duke of Wellington defeated Napoleon.

Moreover, Waterloo being a crossing point on the route of the great European tour, the place also attracts many visitors. The Bodenghien Inn lived its glory days!

1832
The Bodenghien Inn, an unclear future

The inauguration of the canal linking Brussels to Charleroi in 1832 inevitably caused the end of coal transport for the road. Travelers were an important clientele for the inn. Consequently, the heiresses of Antoine and Catherine Bodenghien seeing the future of the inn uncertain, decided to sell it to Casimir Arnould who will rent the building to Emmanuel de Becquevort before selling it in 1936.

Emmanuel de Bequevort gave a new activity to the house: a post house in 1836.

The royal decree stipulated that 8 draught horses and 2 bidets had to be in the relay, which was under the responsibility of Sir de Bequevort.  The latter manages well his relay which becomes a relay of third class in 1841 comprising "3 postilions, 1 fitter in default, 12 horses and 1 bidet". He later became Mayor of Waterloo between 1848 and 1850.

However, the arrival of the railroad put an end to the equestrian transport of mail and Emmanuel de Bequevort went to live in France and sold the house to Count Ferdinand de Meuus in 1850.

In 1889, the owners Angelique Dechamps and her husband Charles Decroeck died and left no direct descendants. Their heirs decided to put the house up for sale. In order to facilitate this, the house was divided into 7 lots. Some of them were transformed into butcher's shops, others such as n°145, 147 and 149 kept their initial aspect.

At the time of the sale, Justinien Pieterhons bought n°147 and decided to take advantage of the tourist craze. He created a café on the first floor and refurbished the first floor with weapons and explanatory signs in English. A few years later, Justinian decided to demolish the stables in order to create a party hall with Art Nouveau elements. In 1930, this became the Familia Cinema. The museum and the small café were very successful. However, after the Second World War, the citizens changed their habits. This considerably reduced the number of customers in the cafés. This one being in a sad state, it was to be sold to an oil company which wished to destroy the building to create a gasoline pump!

1954
The birth of the Wellington Museum

For Count Jacques-Henri Pirenne, it was not acceptable to destroy a place full of history in order to create a petrol pump. That's why he went on a campaign to convince the inhabitants of Waterloo, including the Mayor Jule Descampe, of the importance of its preservation and this was a success. On October 29, 1954, the ASBL 'Les amis du Musée Wellington' was born! Jacques-Henri Pirenne, Jules Descampe, Robert Cluyse and Fernand Pieterhons were the founding members. Subsequently, the municipality of Waterloo decided to buy the other lots, i.e. n°145, 147 and 149. Over the years, the Wellington Museum has acquired numerous collections on the battle of Waterloo.

1954
ABBA at the Wellington Museu

In 1974, the group ABBA gave Sweden its first Eurovision victory with the title Waterloo. On May 18th of that same year, the Wellington Museum had the chance to welcome this worldwide known group! Invited to the Belgian show "Chanson à la carte" by André Torrent, the Swedish group took the opportunity to visit Waterloo!

On their way, they visited our museum and took the opportunity to sign our guestbook! Today, we still keep it preciously.  In 2014, the commune organized a commemorative exhibition for the 40th anniversary of their visit to Waterloo. The inhabitants will tell you, they were proud to welcome ABBA!

In 2015, Waterloo celebrated the 200th anniversary of the battle where Napoleon was defeated. To celebrate this bicentennial, nearly 6,000 extras re-enacted the battle for two days on the Butte du Lion. This event gathered many visitors, but also public personalities, including Prince Napoleon and Charles Bonaparte (descendants of Napoleon).

During this weekend, the reenactors paraded in soldier's clothing in the streets of Waterloo, to the great pleasure of the visitors. Coming from more than 50 different countries, they reproduced the largest reconstruction of the battle of Waterloo.

That year, the Wellington Museum welcomed over 56,000 visitors!

As part of the bicentennial celebrations, the museum organized a temporary exhibition entitled "Destins Crossed" which portrayed the two men, Napoleon and Wellington.

2021
The Empire in Playmobil 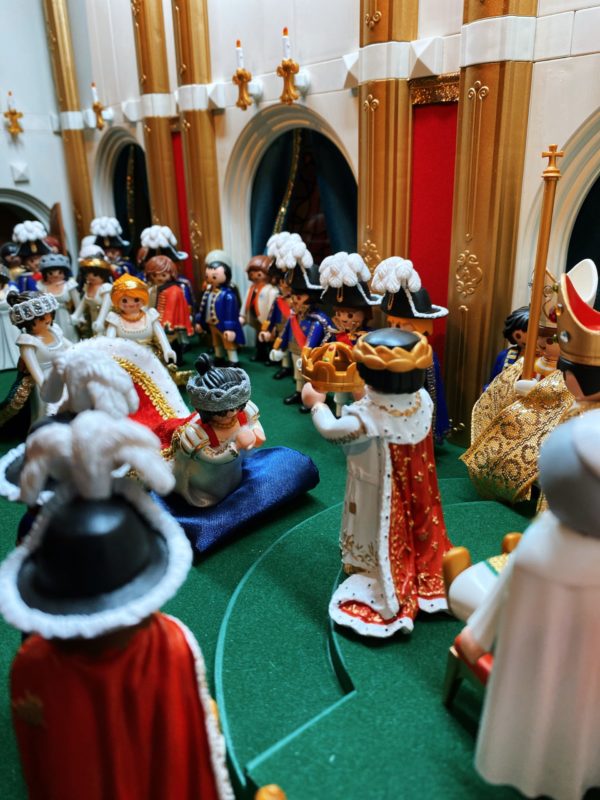 As part of the bicentenary of Napoleon's death, the Wellington Museum organized a temporary exhibition entitled "The Empire in Playmobil®". It was possible to discover a huge model of the battlefield of Waterloo made with many Playmobil® figures.

Numerous dioramas evoking the important moments of the Emperor's life were also displayed in the showcases, for the pleasure of young and old people. In total, more than 2000 Playmobil® were created for this exhibition, which was a great success with the many fans of these little characters. In 3 months, "The Empire in Playmobil" welcomed nearly 15,000 visitors!

A new scenography will soon see the light of day at the Wellington Museum! We will soon begin the work to refresh certain rooms! And that's not all, we will also be making the museum accessible to people with reduced mobility!

This website uses cookies to improve your experience while you navigate through the website. Out of these cookies, the cookies that are categorized as necessary are stored on your browser as they are essential for the working of basic functionalities of the website. We also use third-party cookies that help us analyze and understand how you use this website. These cookies will be stored in your browser only with your consent. You also have the option to opt-out of these cookies. But opting out of some of these cookies may have an effect on your browsing experience.
Necessary Always Enabled
Necessary cookies are absolutely essential for the website to function properly. This category only includes cookies that ensures basic functionalities and security features of the website. These cookies do not store any personal information.
Non-necessary
Any cookies that may not be particularly necessary for the website to function and is used specifically to collect user personal data via analytics, ads, other embedded contents are termed as non-necessary cookies. It is mandatory to procure user consent prior to running these cookies on your website.
SAVE & ACCEPT